International Tennis Rome: Giuseppe and Carlo Tessier sign for the second year sign the champions’ hairstyles: from Pennetta to Tsonga and Becker.

For the second consecutive year Tessier Hairdressers signs the hairstyles of the International Tennis BNL of Italy in a special area of ​​the Foro Italico recreating, for the occasion, a real salon. In these days of the tournament, Hair Dressing players such as Bob Bryan, Flavia Pennetta, Jelena Jankovic, Camila Giorgi, Simona Halep, Boris Backer, Bojana Jovanovsky, Nick Kyrgios, Viktor Troicki and Simona Halep were used.

“The players are very superstitious, they try not to change anything when they win. They are superstitious with everything. Here we do mainly cuts, few hairstyles. They prefer the change of look “, confirms Giuseppe Tessier who, together with his brother Carlo, manages, in Rome, the salons of Cinecittà and Piazza di Spagna.

“When women play, they prefer to queue for convenience. In many cases it is we who do them. We use the spray wax which gives thickness and does not grease the hair. This wax does not fatten the hair and gives consistency. Or we fix it with lacquer. Both men and women have served the same percentage these days. In both cases they asked us for a cut because, for the little time they have available, they don’t always manage to do it before some big tournaments. We made a small change to the look to Jo Wilfried Tsonga (French player n.13 in the world) shaving the hair on the side and inserting a line on the side with the razor. Normally we use more the brush than the plate. Color? We did it a couple of times: the shatush at Jelena Jankovic and, just before the game, with Camila Giorgi (who lost) Eleonora Tessier, my daughter, made her a braid that would have brought her luck ”.

Jelena Jankovic has returned to farse the lucky braid and booked the folding service at the end of the game. Among the champions also Boris Becker who under the wise hands (pardon scissors) of Carlo Tessier gave himself an author’s cut telling that a superstitious gesture he did not have, but that often he gladly caresses the ring on his finger. There remains the curiosity of who he is or who gave it to him. 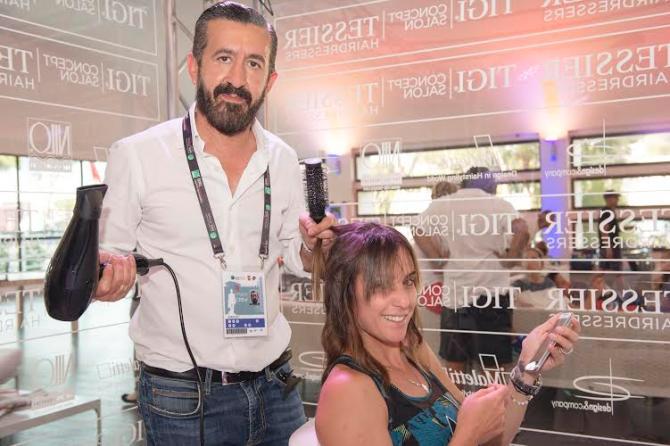